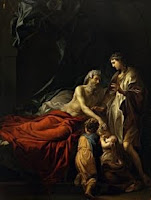 The Two Kingdoms stood side by side for 259 years. After the fall of Israel, Judah continued 135 years longer.

So deeply did Jeroboam impress himself upon the life of Israel, a clear conception of his life and character will shed light on all the history which comes after.

Coming to the throne of the new Kingdom, Jeroboam evinced no concern for the higher religious welfare of Israel. One ambition possessed him—the firm establishment of the Kingdom in his own hand. To this one thing he was willing to sacrifice all other things. Believing that his own interests and the permanency of his throne would be imperiled if his people continued to go for sacrifice and worship to Jerusalem, the heart and capital of the Southern Kingdom, he set up idols, golden calves, in imitation of those worshiped in Egypt. These he placed in Dan, an extreme Northern city, and Bethel, an ancient shrine situated on the border between Israel and Judah.

This folly of Jeroboam never departed from Israel. No one of all the long line of kings which followed Jeroboam ever had the courage to destroy these idol shrines.

Passing by the kings which seem to be of less importance, we study some kings which for various reasons stand out in some distinctness.

Omri and Ahab—Omri founded the third dynasty, and building the city of Samaria, transferred his capital to that stronghold. A vigorous soldier and an unscrupulous king, Omri strengthened and extended the Kingdom, but did much to corrupt the people.

In order to cement the alliance between himself and the king of Sidon, he brought about the marriage between his son Ahab and Jezebel, a daughter of the Sidonian king. Succeeding to the Kingdom, Ahab, dominated by the wicked and idolatrous Jezebel, proceeded to introduce into Israel all manner of idolatrous worship. At this crisis, and under these distressful conditions, the great prophet, Elijah, came upon the scene and waged mighty warfare for the true God against the idolatries of Israel.

Jehu, the tenth king of Israel and founder of its fifth dynasty, was a picturesque and powerful figure. Jehu was anointed king by one of the sons of the prophets and with the utmost promptness and vigor he dashed across the plain, slew Jehoram the king with his own hand, ordered the destruction of Jezebel and proceeded to establish himself in Samaria as king of Israel. By a stratagem he assembled the leaders of idolatrous worship, the priests and prophets of Baal, in the vast temple which Ahab had erected in Samaria and caused them to be slain. Pushing forward the work thus begun, Jehu did not cease until he had destroyed utterly the Baal worship which had so blighted the nation. The reformation thus wrought in zeal and blood does not seem to have produced lasting fruits.

Jeroboam II, while he walked in the ways of the first Jeroboam in that he kept up the idolatry of the golden calves, yet did much to strengthen and extend the Kingdom. Under his reign the people increased in wealth and power and enjoyed a prosperity which reminds one of the glorious days of David and Solomon. Idolatry, drunkenness and licentiousness were rampant, however, prophet Amos and other prophets were sent to denounce the sins of the day and to call the people back to the worship of Jehovah.

Hoshea, the last of the kings of Israel, was somewhat better than his predecessors, but the doom long threatened was hastening apace. The Assyrians under Sargon reduced Samaria, 722 B.C. and carried the unhappy Israelites away into a captivity from which they were never to return.

The prophets were close students of political as well as religious problems, and as the advisers of kings, they often wielded a decisive influence in the affairs of state.

Elijah and Elisha, who prophesied in Israel during the dark days of Ahab and his successors, battled mightily against the Baal worship which Ahab and Jezebel had introduced into Israel. Elijah, a Gileadite of picturesque grandeur, suddenly appeared before Ahab’s court and denounced the prevailing idolatry. By stern word and mighty miracle he did much to restore the worship of Jehovah. As notable among the events of his life may be mentioned: (a) his challenge to the priests of Baal and Ashtoreth and Jehovah’s signal vindication on Mt. Carmel; (b) his subsequent failure and flight; (c) his denunciation of Ahab in connection with the murder of Naboth, and his prediction of the overthrow of that wicked king.

Elisha, more polished and of milder temperament, wielded through his long career a strong influence both on the court and among the people. Among the many miracles which he wrought, the following are of special interest: (a) the multiplying of oil which enabled a prophet’s widow to pay her debts; (b) the raising to life of the child of the Shunammite; (c) the recovery of Naaman from his leprosy; (d) making the borrowed ax-head to swim; (e) smiting with blindness the Syrian forces which were sent to capture him in Dothan.

Amos and Hosea—Born in Tekoa of Judah, Amos was called to prophesy in Israel. At Bethel he denounced the prevailing sins and predicted the Assyrian captivity at a time when outward prosperity made the prediction extremely improbable.

Hosea was contemporary with Amos and continued his labors through the reigns of Jeroboam II, Zechariah, Shallum, Menahem and Pekahiah.

Hoshea, the last of Israel’s kings, pursued a weak and vacillating policy in his attitude toward the great opposing powers of the day, Egypt and Assyria.

The Assyrian forces, at first under Shalmaneser and later under Sargon, laid siege to Samaria, the capital of Israel, and after a desperate struggle lasting three years, the city was taken, 722 B.C., and Hoshea and his people were carried away captive into Assyria, being there lost to history.
Posted by James at 10:05 AM