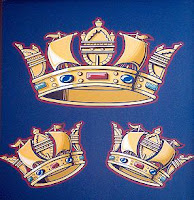 Passing by Israel's  kings which seem to be of less importance, we study some kings of the Northern Kingdom which stand out for various reasons.

Omri founded the third dynasty, and building the city of Samaria, transferred his capital to that stronghold. A vigorous soldier and an unscrupulous king, Omri strengthened and extended the Kingdom, but did much to corrupt the people.

In order to cement the alliance between himself and the king of Sidon, he brought about the marriage between his son Ahab and Jezebel, a daughter of the Sidonian king. Succeeding to the Kingdom, Ahab, dominated by the wicked and idolatrous Jezebel, proceeded to introduce into Israel all manner of idolatrous worship. At this crisis, and under these distressful conditions, the great prophet, Elijah, came upon the scene and waged mighty warfare for the true God against the idolatries of Israel.

Jehu, the tenth king of Israel and founder of its fifth dynasty, was a picturesque and powerful figure. Jehu was anointed king by one of the sons of the prophets and with the utmost promptness and vigor he dashed across the plain, slew Jehoram the king with his own hand, ordered the destruction of Jezebel and proceeded to establish himself in Samaria as king of Israel. By a stratagem he assembled the leaders of idolatrous worship, the priests and prophets of Baal, in the vast temple which Ahab had erected in Samaria and caused them to be slain. Pushing forward the work thus begun, Jehu did not cease until he had destroyed utterly the Baal worship which had so blighted the nation. The reformation thus wrought in zeal and blood does not seem to have produced lasting fruits.

While he walked in the ways of the first Jeroboam in that he kept up the idolatry of the golden calves, yet did much to strengthen and extend the Kingdom. Under his reign the people increased in wealth and power and enjoyed a prosperity which reminds one of the glorious days of David and Solomon. Idolatry, drunkenness and licentiousness were rampant, however, prophet Amos and other prophets were sent to denounce the sins of the day and to call the people back to the worship of Jehovah.

Hoshea, the last of the kings of Israel, was somewhat better than his predecessors, but the doom long threatened was hastening apace. The Assyrians under Sargon reduced Samaria, 722 B.C. and carried the unhappy Israelites away into a captivity from which they were never to return.